With Love, From Chile

I have a visitor in my office.  He's from Chile.  He's a sexie boy with curly hair & deep brown eyes.  He speaks Spanish.  He came with his Gurl who's on her way to Washington.  She rescued him from the streets where his prior owner lacking vet $ left the broken footed (and then broken hearted) boy to fend for himself.  After his rescue and subsequent vet visits; it was determined that there was nothing to be done about his foot as it had remained injured for too long and the tendons and nerves were permanently damaged.

Y'all know I'm not a dog person; I know it and they know it.  But this wee boy, gimping along on three legs is certainly full of the spirit of life!  If she leaves the office for a trip down the hall; he stares at the door until her return.  He barks at any man coming in but not the ladies!  (sly dog!)  My favorite part is when She speaks to him.  She speaks in Spanish to him, that he understands.  If you call him in English; he looks at you but has no idea... When you say the word in Spanish; he's off like a shot!

I suppose that makes perfect sense of course, but I'm completely enamored with an animal that is learning English as a Second Language.  Of course it must be added; when I had my ham sandwich the other day, he immediately came to my chair; put both paws in my lap & rested his head on them looking up at me with those eyes!  Apparently 'pork' is a universal language!  Yes he got some ham because he completely enchanted me with goggieeyes!  There may have been more than one bite too.  I don't remember. 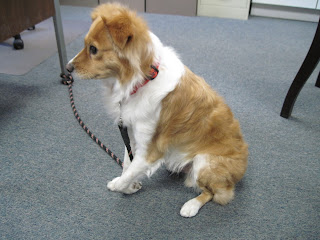 Here he is waiting for Her return...
Posted by Stacy Hurt at 1:00 AM