Last update for the eve:  it's 10:27pm.  I had taken her collar off earlier so she could drink & eat; she did neither and after I gave her the pain meds she immedately went under my bed. She's just come out for quick box trip; ate a morsel or two and went back under the bed.  Sans collar again.  But since she's not bothering her 'bow' I'm not going to worry.  I hope she stays a good girl & leaves her bandage alone.  I know she hates the cone!
Thank you to everyone who's posted & sent their purrs & hugs.
I worry over her so! 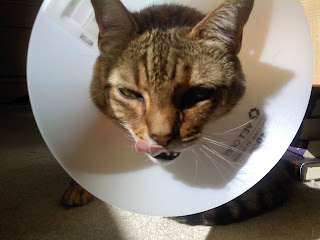 pain meds are a good thing - no appetite but it doesn't matter cos I can't reach the foodz anyhow!
Kitties,  I'll tell you my story:
Last night it wasn't dark or stormy but it was windy with the 'Devil Winds' blowin like crazy.  After the  other kitties was a alseep; That Woman let me out so I could go in the garage.  I like the garage; it has carpet and lots of places to sleep with blankets all over the place and one GIANT heater.  I like to sleep on the hood sometimes.
BUT I tell you, I KNEW something was wrong.  It didn't smell right out there so I went out rrreeeeeallllllly slowly to investigate.
What did I find?  An INTERLOPER!  There's been this all black fat girl kitty hanging around the backyard.  I know cos my window overlooks the walkway to the backyard & I sees her going under the gate (there's a whole in the bottom and she squeezed herself in there)  *probably cos she's too fat to leap up the fence!*
Anyhow; she got in MY garage & was hanging out in there!  She had been hiding in there and the other cats didn't know but when I went out there I saw her right off and RAN RIGHT UP TO HER in my Bengal self & said 'HEY! You gitz outta my area!' to which she had the affrontery to reply 'Oh HELL noes, you guyz gotz the life of Riley (no relation to goggie) and I aint'a be gettin' outta here!"  To which I YOWLED just like Miss Trish at Katnip Lounge thought... 'OH YA?? WELL BITE ME blackie straycat!  This here is MY OUR digs &you best be off back to whatever food trough you rolled out of porkie!'
My guess is she didn't appreciate me calling her 'straycat' cos when I turned to come in she attacked me for NO GOOD REASON!!! (just all the bad ones)   How did I know that little hussy would take me up on it!  I mean who does that???  I heard That Woman comin' up fast (LOL; she nearly fell over running thru the kitchen) and I knew I woudln't get anothter chance to show straycat how aggresive I really was but when I saw the look on That Womans face I stood and held my ground.
There was a hole in some vent thing and that blackie cat flew outta there.  That Woman picked me up right off (after the stray left so I wouldn't lose face) and she tried to look me over but I was soo mad still I was yowling at everyone so she put me back in my Bengal cave and let me be to calm down.
When She came in later that night to our cave to sleeps; I curled up right next to Her and purrrred.  Though everytime she would pet me and get near my tail I would make a soft, gravelly 'ruuhhhh' noise.  She couldn't see anything at the time.  Next morning I didn't get up for breakfast when The Gurl came in with it.  I let her pet me but kept my tail flat down.  Then The Woman just put her hand on the area & could feel it all warm.  Next think I know, I'm in the solitary box kennel carrier and on my way to the vet.
Here is the result of that harrowing endeavor.
oooowwiiiEEEEEEEE! this is NOT the kind of bow that makes you prettyful.
Look at my beatiful tail!  It's ruined!  *sniff* 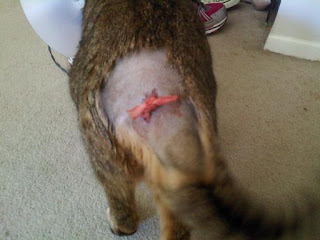 uhhh; Houston?  We haz a problem! 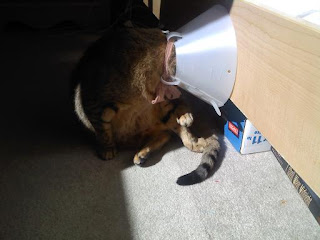 And can you believe She has the nerve to wonder if that straycat is all right?  sshheees!
I think I'll just lie back in the suns & dream of more sun.
Posted by Stacy Hurt at 3:22 PM