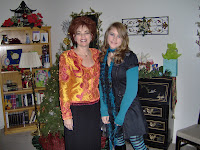 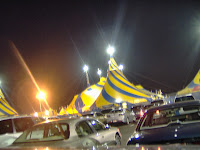 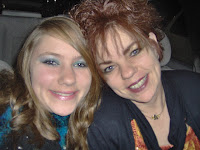 The "Corteo" show was simply amazing! Of course no cameras were allowed so we got pic of us before; in the car & after when we got home. It was so much fun!!! I'm holding a backpack/purse I got there. My christmas present! woot! El got a tshirt jacket; so adorable. The food was wonderful! It was totally all I expected and more!

*Fiber Freak Artist Alert~if you don't want to read lengthy descriptions of the costumes ... too bad! LOL*
We entered in the "Tapis Rouge VIP tent" and found the coolest atmosphere possible to whet your appetite before you go to see the show in the big tent. Inside there were big screens that had shows past flickering on them. The music was wonderful. Also, (my favorite part) in acrylic boxes around the tent; there were all these different masks!! Most with feathers and beads & OHMYGOD you can imagine me being in heaven looking at all the detail... If I was rich I would have my own collection of masks & I would start every single one of those! They were absolutely gorgeous! Of course they were all for sale; the one I simply adored was a rather small comparitively; vibrant blue crushed velvet with all these wires (coated in metallic blue & gold) going out from the entire top where they spiraled all over. The face part of the mask was beaded & lovely ; it was only $325.00) :) but just looking at it made me happy!

There was food at several stations and people were walking around serving lamb chops; fried shrimp & the like. It was all 'finger food' and an open bar! I managed to drink two glasses of cab before the show and it's a good thing they were serving food! We were certainly the belle's of the ball I can tell you that! People in our tent stopped me and would comment on my jacket and ask me questions about it. When we (our VIP group) walked into the big tent to be seated (all the other folks had all ready been seated) I could see people watching us & looking at Ellen and her stinkin' cute turquoise striped tights and boots. One lady just stared and literally pointed at me, I could tell she was saying something to her friend about the jacket. Later she did come up and give me a compliment. El was sooooooo cute it wasn't funny! (We lived my motto: Better to be looked at; than looked over!)
We wound our way to the big tent to see the show after an hour of noshing. This Cirque show was Italian Renaissance and the costumes were simply stunning! The show centers on a clown who envisions his own death and the 'funeral cortege' that follows. The costumes were sumptuous works of art with Angels flying all over in their lovely wings! (These were not the stupid, giant Victoria's Secret wings but finely shaped, elegant long slender feathers with just the slightest hint of gold trim~ each pair Angel's were all different!) There were three giant chandeliers that the performers did aerial manuvers on. The beads on the chandeliers just added to magnificence as they spiraled in circles so fast & the way they changed shape while moving. It was breathtaking! There was one sequence near the end where there was the long narrow trampoline going from one side of the stage to the other. The 'angels' would start at one end in their lovely off white long dress like costumes and do back flips (or front flips) all the way to the other end. They did them slowly so you could see the fabric just move in big arcs catching the light! There was one performer who did backflips from one end to the other so fast I don't know how they stopped her from flinging out into the parking lot! El & I were just stunned! We kept nudging each other; neither wanting to look away for a second to see what the other was seeing! I am always awed by the physical prowess of the performers and Corteo was no exception!
During intermission we were free to go back to our VIP tent where they were serving dessert! It was mostly all chocolatey things. They had the little pastry bites full of custard with that lovely dark chocolate on top! I don't think El nor I moved from that table during the entire intermssion except to go get a couple diet cokes. We did try nearly all the deserts but the eclairs were our favorite. ( the next day I paid for my indulgence with a class A migraine but it was SO worth it!-- I was able to go later in the day and get medication so that helped) The the finale was spectacular! El and I agreed that while our seats were 'the bomb' it would have been good to actually sit a few more rows back to be able to take in the entire stage without having to look right or left too often. But we sat through the whole thing saying "WOW!" and "OHMYGOSH!" and when I saw this guy hold a ladder (not the home depot kind. just the two verticle sticks w/ some horizontal sticks joining them) walk up and down it and swing around on it and do a handstand from the top of it I was like "JEEZ! I can't even get up on a step ladder without my knees going all wobbly". Oh it was phenomenal! As we were exiting our VIP tent after the show (they held our purchases there till it was over) on the way out we were given our complimentary CD's of music "The Best of... Cirque". We listened all the way home in the car & when we got home too!

We sat on the couch in our jammies & took oodles of pic's of us being silly (neither wanted the night to end or have to take all our pretty make up off) I think we finally got to sleep around 3am. What a fun experience!

It was the best Christmas present ever!!! 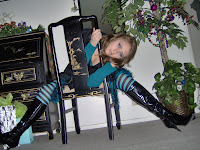 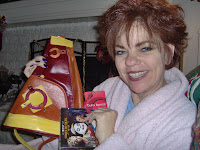 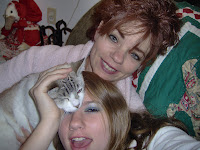 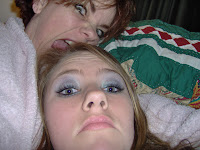 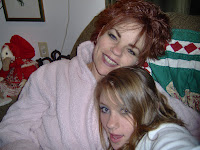 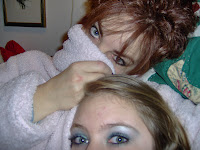 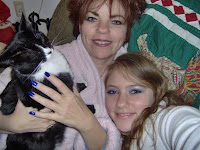 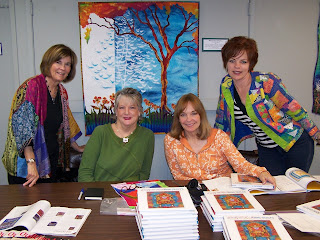 Book Signing at Soft Expressions in Anaheim, California on Saturday, December 1st. Exhibition of our embellished quilts in the upstairs gallery in December and January: Mon-Fri from 10am to 4pm . Thank you to everyone who came to see us! That lovely piece behind us is Terry Waldron's "When Trees Dream". It is simply stunning!
Posted by Stacy Hurt at 10:58 PM No comments: