Ms. Stella is approaching critical mass as the 'plastic thing' is still on and will remain so for another 3 days.  None of our conversations are re-printable at this time. (at least her side isn't) 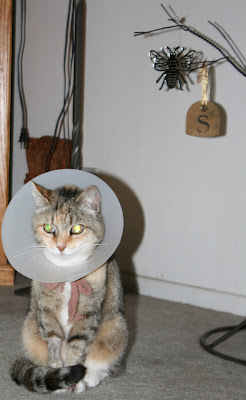 MS: *from the next room* I HEARD THAT!!  are you blogging in there?  Are you writing stuff on MY blog about ME without MY knowledge?

BUT, did that stop her from sneaking out to the backyard?  NO!  While my attention was diverted in the bathroom with a story I will share soon... SHE, with her cone on, managed to slide the invisible forcefield over, and then use her good paw to open the screen door~!  She is simply encourageable!!!  (obviously her guard was bought off with any number of tempations!) 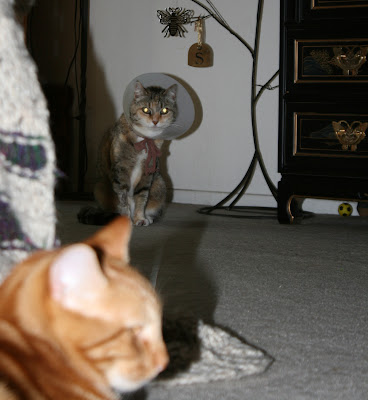 As luck would have it she had only made it to the shady area she loves in the afternoons and was lying peacefully in the long, cool grass.  So I had to be the nasty warden and haul herself back inside and THIS time the door stayed locked~!

She rewarded me by continually banging her cone into the slider door as a way of 'knocking' I suppose and when I would tell her to stop she would only turn and mournfully yowl at me. Oh Stellie.   Soon my love.