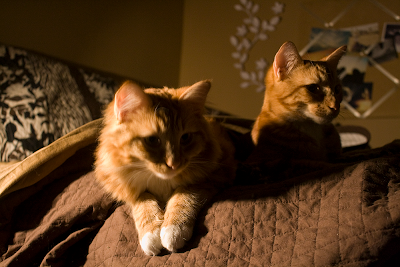 Yes, yes, I have been so remiss in getting this out and I apologize.  With Christmas ending, New Years eve gone and now back to work trying to settle in with 6 felines in the house to care for it's been an adjustment to say the least.  (plus, I got a Kindle for Christmas and as an avid reader knowing that now I don't have to peruse stores or wait for the mail, being able read instantly has been killing me!)  In addition, Ms. El has a friend who had all four seasons of 'Heros' and lent them to us.  So we've been sort of marathoning and THAT has been fun but completely unproductive.  What I kept saying to El was "How do folks even get roped into watching these kinds of things when they have to wait each week or whatever to see the next episode???  Thank COD we don't watch regular TV.  *sigh* but I digress... 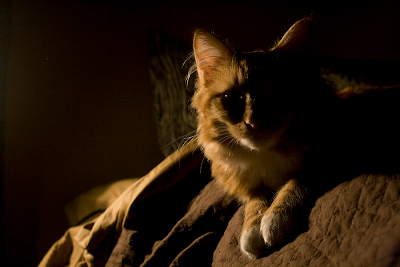 Y'all know we rescued Elliot from the pound where he had contracted a URI (upper respiratory infection) he was so ill that he had to come home to be treated with antibiotics before they would even neuter him.  Well, with in days we had him nearly fully recovered.  He was kept warm, he spent a lot of time in the bathroom when hot showers were running.  He had his medication and highly nutritious foods that would clean up his luxurious but filthy coat. 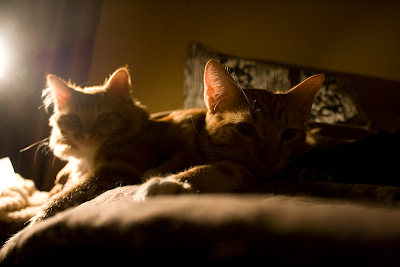 His face makes me smile and my hear leap! I wasn't planning on falling in love so  quickly.  Anyway;  we really felt badly for Oliver being left behind at the pound but we simply couldn't afford another $140.00 to spring him.  (never mind the knowledge that not one but two extra mouths would be straining our struggling budget as well).   But as it happens, Dec 22, Ellen went with her father (Pat)  Christmas shopping (he would always wait till that day to do it) and while she was helping him purchase all his gift cards MOL!  they talked.  He also felt bad about Oliver being left behind and went into cahoots with Ellen to have him home by Christmas.  Turns out even though Oliver had a URI he had fared much better than Elliot and could be neutered the next day so that meant on Christmas eve, (when I am alone because El spends the day with her dad's side of the family) I got a call from the shelter saying our cat was ready to be picked up.  I called them back saying I didn't know what they meant given the cat I adopted was here at my home.  They told me an 'Ellen Kraus' had come in on the 22 and adopted the animal they have waiting.  So 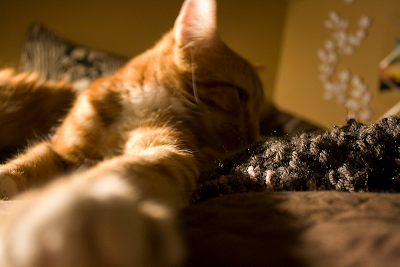 ﻿I grabbed my purse, cell & keys and flew out of the house!  While driving I called El who told me what she had done.  She said she didn't think he'd be ready so soon.  I told her he was and I was on my way to pick him up.

You know, the shelter tells you (and I'm certain the vet would tell you too) that when a boy's had his snip he needs to be kept quiet for a day or two.  I was worried that he & his brother would have issues as they hadn't seen each other in weeks.  I realized when I got home I would need to cloister Oliver in the sewing room (NOT a good place for young kitties!) and so I knew he would be bathroom bound until the room was really cleaned up.  I got him home, secured him in the bathroom near Ellen's bedroom and all he and Elliott did was sit (one on either side of the door) right up next to each other, and chirped and mewed and tried digging to China to free the other.  So after a few heart wrenching hours I caved, I opened the door slightly and took Ollie in my lap and kept Elliott at arms length... MOL!!  I needn't have worried at all, they immediately struggled free and got nose to nose chirping at each other and literally jumped up on hind legs to rub each other and then roll around on top of one another only to run off side by side as if they had each swallowed a magnet!  (like they do with cows to keep them in straight lines side by side, how weird is THAT!)

Well as you can see by the previous photos they have been inseparable ever since and Elliott had certainly bonded with Ms. El in the time he was here alone and with her in her room and Oliver? Well, he's mine.  It just happened.  He jumps up to rub my leg when I come in to see them in the morning.  In the afternoon and evenings now 'Da Boyz' come out under supervision and last night ALL the girls (not Jengs,she will take much more time and stays in her room with the doors closed) were in the living room and there was hardly any hissy fits at all.

Ms. Stella and Elliott come nose to nose often and the first time, just once he hissed first and they went their separate ways.  Then, a couple days later when they would nose tap she would sort of lift her paw but nothing happened. (well except for Eli looking all sheepish)
Oliver on the other hand is not the brightest bulb in the bunch.  (Cod love him!) When Ms. Stell is sleeping on her hammick he will in his kitten enthusiasm, charge right up to her and stand sideways Halloween kittied out... She just slowly lifts her head, opens those giant eyes and like an elephant emits such a low rumble at him that he immediately falls over on the floor belly up!  It's too hilarious.  She's not comfortable enough yet  to play with them and they are not allowed outside (and will not be allowed out) so Stell can feel safe and have the complete run of her own yard where she naps under the bird of paradise all the day long. 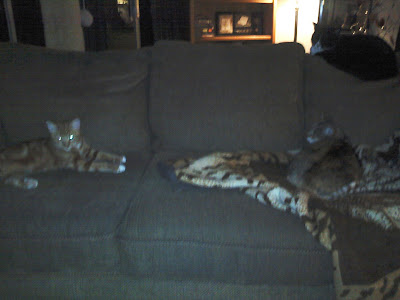 (the couch is Switzerland apparently)

All things considered I have to hand it to my girls, this has been a smooth transition and they have handled it well.  Well, That Scrappy Cat I swear has a 'kick me' sign on her that only other cats can see & Elliott 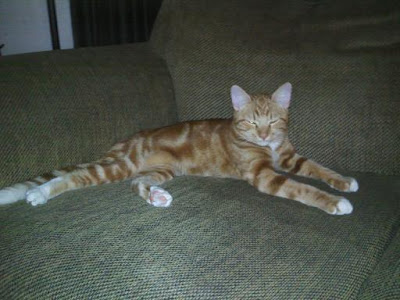 And this right here has touched me in such a special way.  I started my (single adult) life with two ginger sisters, it seems very fitting that (at nearing the 50 mark of my life) I take in these two and in the bargain, got a ginger lap cat to boot! 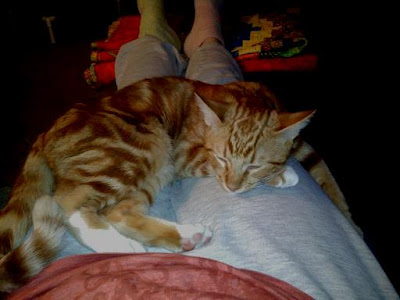 I am so in love with this little goofball!

xoxo
That Woman
Posted by Stacy Hurt at 9:49 AM