Is That A Monday I See Before Me? 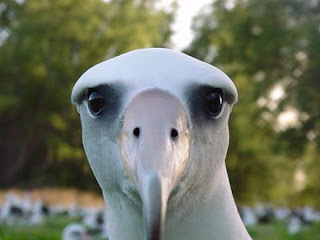 well, if dis dont's scare away the monday, i'll could use the photo we snuck of That Woman gettimg out of the shower.  we nearly lost one of our lives each after seein'  that!

ppeee sssss: yes you kitties were correct; I was boicatting that blankie just to getz my points across.  You can'tz blame me. after  we had to listen to her going on....and on.... about blah blah this quilt and blah blah that quilt... it was just too much.

ppppppsss: for those kitties who asked
yes, it's for real. it's an albatross
isn't he just darling!

their wingspan is near 10 feet.
they spend 99 percent of their time flying over the ocean looking for food.
I'm currently making an art quilt about the albatross on midway island
i was inpired by the poem
Rhyme of the Ancient Mariner and this stanza
Ah ! well a-day ! what evil looks
Had I from old and young !
Instead of the cross, the Albatross
About my neck was hung.

Sadly, thousands of ablatross chicks have perished of starvation as the food the adults are picking up is all plastic refuse.
There are photos online of the chicks laying in their nests and you can clearly see all the plastic crap they have ingested along with bic lighters, milk rings, etc.  I will post photos of my art quilt when it's done.
For full details of the tragedy; you can look here:
http://articles.cnn.com/2009-11-03/tech/midway.atoll.albatross_1_midway-atoll-plastic-pacific-ocean?_s=PM:TECH