Well; I must say that watching Mr Larry drive off with his new person wasn't nearly as horrible as I thought it would be.  I took lots of video of him before he left but I can't get it to load either via you tube or just direct to blogger.  It has been very frustrating and time consuming only to find out it didn't work.  So I gave up.  If anyone has hints on ways to load video where it actually doesn't take several hours to load please let me know.  The videos are only one minute long each so I can't imagine why it's being so stupid! 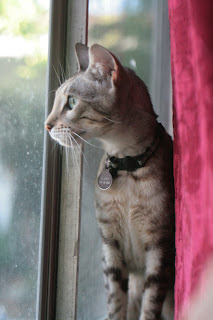 The rest of the house cats have certainly reverted back to their 'pre male cat in our house' catitudes and for that I am most grateful. 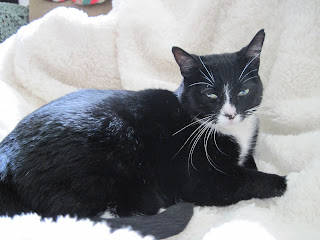 Since I was going to be off on Friday (getting Larry situated) I decided to take a whole week of vacation.  I have much yardwork; sewing commissions & general after the holiday cleanings to attend.  After Larry drove off I went straight to the backyard with the electric hedge trimmer.  Everything was going along wonderfully until I got to the fortnight lilys.  Then as I stooped to start 'hedging' them I felt my back go. 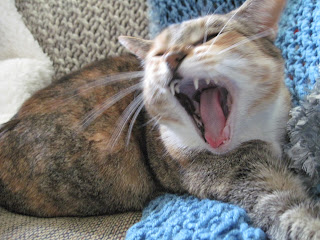 I won't even bother telling you why the sky over my house must have been literally black with all the words that came out of my mouth then.   I decided that since the gods decided to be evil to me I wouldn't give them the satisfaction and I immediately took steps to minimize the injury to my back by lying down right away with ice.  And vicodin.  And ibuprophen.  Yesterday I spent the entire day laying on the couch in and out of sleep watching the extended version of the Lord of The Rings entire collection.  Today I was able to walk around and take a shower.  I WILL be in my sewing room today come hell or high water.  Even if I do resemble a pretzel. 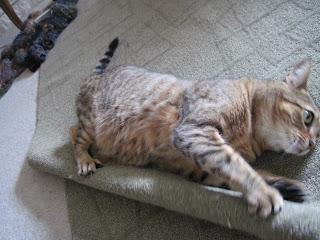 So; sitting at the computer is not what I should be doing but I wanted y'all to know what was going on.  I simply will NOT let this ruin the first vacation I've had IN A YEAR thank you very much!

I will get to visit blogs periodically and there will be no incriminating photos of me lying on the couch with all three of my cats on top (well, ok; Ms. Stella was lying next to me but not ON me) of me keeping me down to rest. 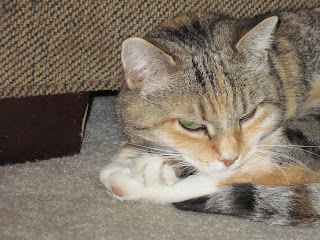