Note from That Woman 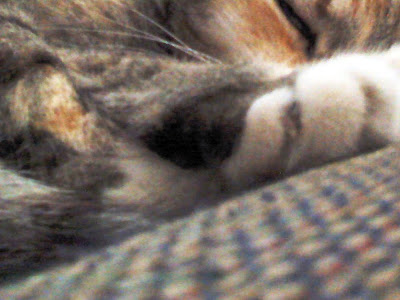 A Special Thank You to all our furriends & their humans who sent purrrrs & hugs & get well fishes! You guys and gals are the BEST!
XOXO


Ms. Stella is home tonight resting.
She will tell her side of the story soon.
She has endured many tests.
We were there 2 hours.
She had yaked up something that was mucousy and really bloody & smelled terrible. I was very worried as you can imagine.
After all the tests, the vet said SHE'S FINE. All her bloods are fine; pee is clear, poop shows no bugs. He said she was in amazing shape for being 15 and aside from being a bit under weight (at 8 lbs) she's as fit as a fiddle.
So what the heck?
dunno?
Maybe something she ate just didn't agree with her.
*sigh*

I'm so relieved. So very relieved and feel so much better knowing that she's also now had her 'old girl' check up too and that's a very good thing to have out of the way. (because I worry over that each year as well)

I can't help but add, it's just like Ms. Stella to freak me out so badly and cost me over 300 bucks to be told she's the healthiest cat around.
Cod I love her!

Added to the stress was trying to find her vet! I had to google her Dr. I called to get her in today & when his name wasn't on the voice mail I was like, what? Stella doesn't like just anyone. It's really important that your cat like your vet especially when you say things like 'anal expression'. He had left the office he worked in when we first met him (I'm so thankful for that actually but won't go into that.) I found him a mile down the road in a bright new lovely clean office with three resident cats, a burly white odd-eyed totally deaf male named Lucky, A giant ginger cross eyed boy named Forrest (Gump) and a darling all black kitten named Milagros (miracle) they call Mila. She's up for adoption. And while you can't wander to 'the back rooms' without a staff person you are free to wander the clinic where the staff are working, etc. ask questions, chat and pet the kitties. The vet techs are AWESOME! So friendly, happy and helpful! (A real change from where he was)
It's a fabulous new place for him and I'm so happy it's his. He was working in partners with three other vets at the last place and they all share the limited staff.

They do all the bloods, pees & poop tests right there.

And there's even a huge grassed, fenced area off the parking lot with chairs & such for recovering goggies to excersize their broked but fixed parts. We thought that really thoughtful of them! Dr. Horn (Stellie's Dr.) specializes in the orthoscopic stuff they use in goggies hips & such. Pawsome!

Whew! I'm wiped. Gonna put my feet up and have some dinner.
Thank you again everyone!

It means so much to us!