So there I was kitties... Alone, ALL ALONE in that room. It was so dark (even with the night light on) and COLD (even with my fleece blanket and towel, and rug and cushie bed). I was deprived of all susten....sisten....food (except for those kibbles and some water) There was nothing to do in there but plot my revenge. My brain was spinning... I had nothing to keep my mind off what tortures my captors had planned for me (except my favorite mousie toy, my new plague rat with nip in it, my ping pong ball *that goes really good in the bathtub* and my litter box) BUT OTHER THAN THOSE eensie weensie trifles, it was HELL I TELL U!

I can't tell you all the bad things in case there's babie kitteh's reading... Even when one of my jailers would come in and try to pla...plaka....make me feel better; I would have none of it! I was brave, strong, and as mancatly as I could be. (and not one bit sorry for whatever lies the Demon Queen and her Spawn are claiming that I did!)

In the nightime; they tried playing the good cat/bad cat game on me. The Demon Queen came in and took all the toilet paper so I couldn't sneak anymore notes out! Then... The Spawn came in with all babie talk and kibble in some attempt to try and make me talk! AS IF!

So the night wore on into the hours of the morning and then; when I had entered a trancelike zen state from the hunger, the door opened a crack and more kibble was shoved through the door. I didn't even get up! I was so weak by then (it had been at least seventybillion hours since I had eated last) I could only stare ling..lonn...a long time at the food as I lacked even the strength to stand. *sigh*

The Spawn was home all day (I heard the Demon Queen say she was sick but I'm SURE she was home to make sure I couldn't keep yelling for the cops!) She was under strict orders from the Demon Queen I was NOT to be let out. So I waited...

And the seconds turned into minutes and then the minutes stretched into a half an hour and I lang....lien...I got sleepy. (I had to take long naps to keep up what little strength I had left)

Just when I was resting in the arms of the great Sphynx herself; I was rudely waked up by the door opening and my poor brain and stomach that was yelling and confusing me.

OH NOES! Not the Stinky Food! Oh what horrid females you people are! Have you no shame? How could you do this to such a lovely, sweet mancat like myself? Nooooooooooo! And to top off my humiliation? They filmed it! *see below since blogger took three days to upload the vid and THEN wouldn't let me move it into the correct position* pphghfrjrthghtht!!!!

As you can plainly hear, I told those Ebil females OFF! But let's face it kitties, a night in the klink to 'Think About What You Did!" would make anyone a bit peaky. 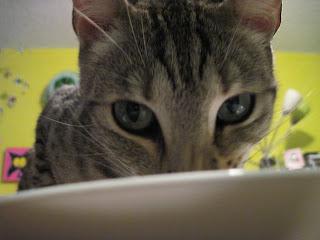 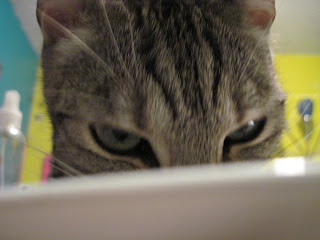 My Ebil plan of revenge will comm...cimen....start later.
Posted by Stacy Hurt at 8:29 PM