NOTICE:
To all the cats of this house; This is 'That Woman' making a proclamation that will be posted on all the closed doors of the neighboring territories in this Country that is Our Home.

Let it be known throughout all the lands of this domain where all of my dearest felines reside; Pay HEED, HEARKEN TO ME be Forewarned!

If you even so much as think of getting out the territory you have the privilege of occupying and try invading anothers territory thereby causing the inhabitants of that country to go to war with each other; you will be immediately apprehended and thrust into solitary confinement without remorse (or even so much as a tinkle ball!) Furthermore, depending on the heinousness of crimes of war YOU CAUSE you will be made to endure the punishment below. In addition; PHOTOS of you in this punishment will be posted on this blog so that ALL KITTEHS will bear witness to your punishment and subsequent humiliation. I've ordered it from Amazon today. That is all. 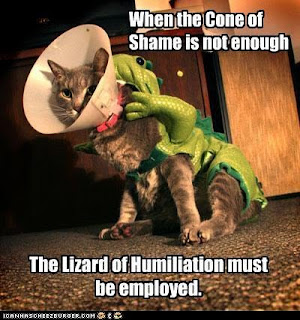 Any resemblance to Sir Lawrence here is clearly unintended but oddly appropriate!
Posted by Stacy Hurt at 9:29 PM