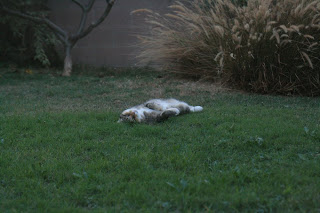 Speaking of Hell... This last week here in Orange CA. we had temps that reached 110. Was I bothered? Can you tell? Here I am in the cool grass, upside down (my favorite position) flat out. Sun baking my belleh. I am perfectly aware of That Woman calling me (in vain) and trying to tempt me to come inside to the air conditioned house. You can tell my eye is open. But to no avail. 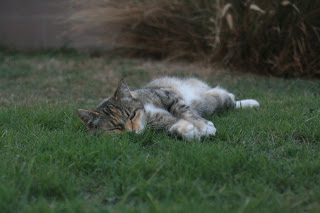 I am too busy sniffing the grassmail and smelling the lovely barbecue smells wafting in the oppressive heat
. 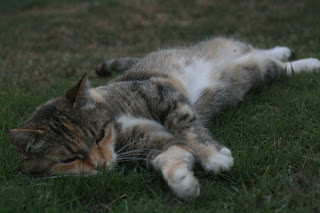 Let me tell you a little story kitties of why I'm not goin in there right now... 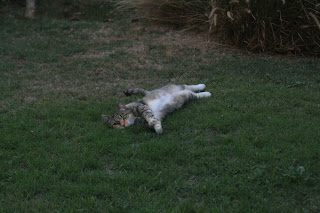 On Torbie Tuesday I think it was, it was a suppperrr hot day. That was the 110 that I told you about earlier. That Woman felt after returning home & seeing her wilted flowers; that she'd better give them a good deep watering. The planter is ground level right outside the girls room. So she set her timer, went in to watch some dumb moving pictures on the long black box. It had little tiny people called 'hobbits' or something. A lot of hullabaloo over some shiny ring thing... anyway...

The timer went ding (I could even hear it outside where I was!) but she was at a 'good part' of the movie so she ignored it. Later she went to turn the water off. She had to wade through the little low spot (that is another of my favorite sleeping areas) to get to the hose.

The next morning, she woke The Gurl for school and while in her room she checked her email on The Gurl's computer. **She can't use hers since it got a virus and doesn't work anymore ~That's why she's not been giving you updates so I apologize for this long one. THE broken computer at least is NOT my fault! Even I don't understand the thrill of ruining someones life anonymously... I mean, the whole point it is to make sure THEY KNOW IT'S ME!**

So while she was sitting at the computer in her bare feet on the carpet, she said she thought the carpet felt a little too cool. Upon further inspection the entire area in front of The Gurl's window about one long cat length into the room and at least 8 cat lengths long (unless you are that ridiculously loooooong mancat then it would about 6) is soaking wet carpet. And to further the mess, it had previously been covertly used as someones emergency litter area when The Gurl didn't get up in time to let her out!

So kittehs... You can imagine the stench. And our noses are quite adept at smelling and 'reading' the peemail. So now it's like YELLING to us kittehs. That poor mancat has been moved (mercifully) to the sewing room and The Gurl has been spending her sleeping time on the couch. Right now there is a giant fan pointing at the wet area. (as of this date 4 days later it's more dry and barely tolerable) The heavy velvet curtain was soaked halfway up, the mancat's bed & blanket are in the garage awaiting the laundry since they were both sopping wet. There's all this white stuff That Woman dumped on the carpet to calm the smell (and she's all ready had to order the Anti Icky Pooh from Amazon for permanent odor control) She says if you have cats or dogs even & have been unable to get rid of the smells THAT is the only thing that really, truly does work. And believe me, she has tried them ALL!

So, now you know why I'M not goin in there. Better to be out here where the grass is cool; the lizards are friendly and if I lay belleh up long enough the shade of the tree will find me. 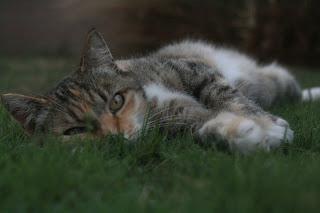