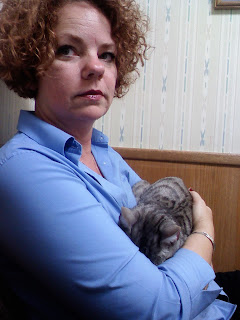 From: Mr. Lawrence (Larry)
As anycat can see; I'm in the ARMS of THAT WOMAN being HELD!! How did this truly appalling thing happen you ask *shudder* ? Well let me tell you.
As you know, I was staying in The Gurl's room but since I was being a good mancat, I was also given one third of the house to myself. That includes (but is not limited to) The Gurl's room; Her litterbox room; and That Woman's sewing room .
The sewing room is quite grand I assure you, everycat should have one! There is a huge window looking out at the backyard and there's a bird feeder there that gets all kinds of action daily! There are tons of way up high places to perch and soft blanketie places to lie down and cupboards to open (and lie in) with all manner of things to sniff and shred with my lovely claws. 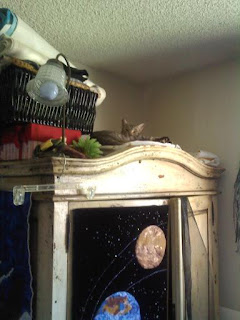 She had some stuffed tiny bird shaped things she made 'by hand' but I showed her exactly what they were really made for even without nip in 'em! Now of course, they are completely mine (well duh!?) as she 'can't use them for anything now.' The ONLY drawback was That Woman put all and every kind of really fun things to play with AWAY!! I can't tell you how hissed off this makes me! I mean Seriously! There used to be this really cool yellow plastic handled thing with a super sharp shiny silver wheelie on it; it was so shiny I could see my regal face in it (to make sure not a whisker was out of place) and SHE had the nerve to put it AWAY! Some lame excuse that I could 'cut myself to ribbons on the blade' . She went through the room and I heard her reading her checklist of things to hide... (scissors, check! pins, check! thread, check! mixed media ephemera, check!) Now, all those things that filled me with curiosity are in a drawers that even SHE has trouble pulling out. What's a mancat to do? So, I make sure all flat surfaces, softie fabric things, and chairs have my lovely silver furs all over them. That'll fix Her! Plus, I can leap down on her head anytime I feel like it!
*sigh* but I digress. So anyway, one of the blanket things was all black, it was my favorite thing to lay on. One day when She came in to get something she looked very carefully at it. "Oh Dear" she mumbled. Next I heard her talking on the tiny jingle box she carries around.
..."yes, he needs a visit
...he has tapeworms...(NO idea what she meant by this, she wouldn't even let me play with her Tape Measure thing)...
....yes I'm sure. I know what they look like; 3pm today? Great, see you then...click." 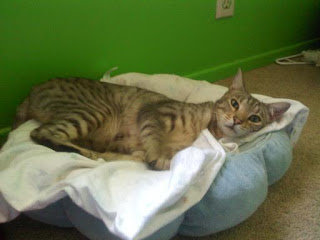 Well I can tell you kitties, the way She looked at me then sent shivers of ice down my spine! I had no idea what she had said to the box but iI wasn't about to wait around to find out. I ran for my rug and became my persona : "El Purrito". I was safe there until The Gurl lured me out with my favorite toy! I must work on steeling myself in the future. 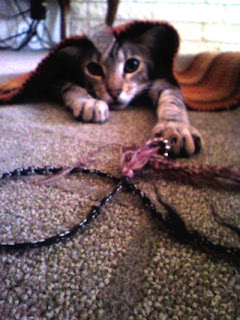 The Woman told The Gurl to put treats into my TeePee bed and naturally I went in after them! (NO, I'm NOT a treat whore! I'm starving All The Time!) so there I was, enjoying my treats when all the sudden! ZZZZIIIIIIIIPPPP! What The PAW was that??? OH NO, now I'm trapped! (I secretly was askeerd I was being sent back to the other house where I lived (only they kept me in a pen in the garage)! 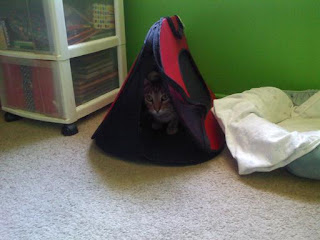 And from there the day just went downhill. I found myself in my TeePee on The Gurl's lap IN THE CAR! You know what THAT means kitties??? Oh Ya you DO! Next thing I knew, I was in some room where there were too many smells to count, my heart was beating like mad, my furs were falling out en masse! I was so askeerd that I sough refuge in Her arms, you can't see my lips moving praying to Bast that 'I will never go outside the box again..' and I 'promise to let them pet me' and 'I promise not to bold out the door anytime it's opened and to only play with toys I'm supposed to' and...well, you get the picture. And through all of my prayers I could hear That Woman and The Gurl talking as if nothing in the world was wrong!!!
Then... The door creaked open and even though my eyes were shut tight I could hear a Man's voice and heard the door creak closed and then all of them were talking and then I could feel the cold steele table on my delicate feets, it was friggin COLD! I kept my eyes shut, I was shuddering more than a loose screen on a windy day and then the Man said; " He's a beautiful cat!" Ok, vanity be damned, I simply had to look to see what an obviously well bred human and super intelligent person this was! I let him weigh me (I only weigh 5 lbs.) He was so nice I wanted to tell him I hadn't been feeling well for along time but he was so smart he all ready knew that! He said it was a good thing That Woman was paying attention as "Cat's are such good maskers of illness." They are pretty sure I've had the tapeworms for a while since I have been eating like mad since I came to stay and am still so underweight. Just when I thought this man could read my mind and I was quite ready to go with him where ever he wanted he left! Then some other Boy came in with some other Gurl and THEN do you know what happened??? WELL! The Boy put the 'momcat grab' on the scruff of my neck and the Gurl stuck me! To my mancatly credit, I did not yowl or hiss or bite anyone. Though I did give a few mock charges at them from my TeePee after they put me back! YA! I showed THEM who was boss!
I had been perfectly quiet in the car and a good mancat to My Ladies but as soon as I could smell the garage opening, I was yowling like mad to get out! The Gurl carried me to my side of the house where it was blissfully cool and I was given plenty of treats and TWO new clean litter boxes! So to that I say: 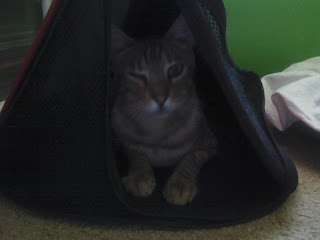 Here's lookin' at you kid!
addendum from That Woman:
Mr. Larry was having improper elimination habits as well which did prompt me to watch him more closely. He had been urinating on Ellen's bed of all things: specifically on one blanket in particular even after it had been washed mulitple times. So, I called Marilyn over at Bengal Rescue and she gave me some tips to try. Most important was to get his current litterbox (that had a cover) out of El's closet, take the lid off and place it out in the open. She said cats want to be able to see all around them when they do their business for safety. That is why he was using El's bed; he could have a clear view of the entire room from there. Also; we were to get him this type of box. It's a sterilite container sans the lid. She indicated to put one cup of old litter in it on top of at least three inches of new litter. Place both boxes in plain view in the room. I asked if I should cut space in the side for easier access but she assured me it was only 12" high & he should jump right in but he'll still be able to see out. It took him all of an hour to figure out he could use that box & now almost uses it exclusively. 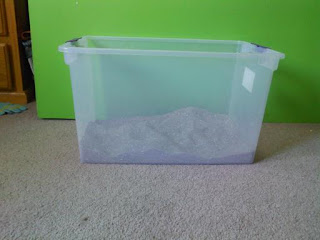 I did get one more & put it out in the entryway where my own cats seem to have developed a flair for widdling there in the night. It's been a week and though Ms. Stella jumped in it once and walked around inside, not one of them has used it. That'll be my next problem to solve. But for now, Mr. Larry is doing much better, seems happier and though he still won't let us voluntarily hold him, (and you can bet I soaked up that vet visit holding for all it was worth!) he seems to understand we aren't going anywhere & we do love him and want to care for him until he finds his new furrever home.
Thanks for reading!
Posted by Stacy Hurt at 11:47 AM