Helping, hiding and Jenga has the last meow!

So there I was, feeling better & helping That Woman with her ironing. (don't ask me; she puts this hissy thing on the flat part up there & rubs it all around then moves FUN part down here and starts over again~my job is to make sure the part she finished is all flat...humans are so weird! Don't know why she just doesn't lick it flat!) 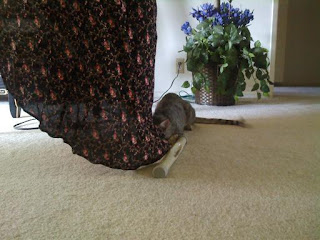 Anyways, after I was done helping, I went exploring with my lazers on and LOOKIE what I FINDED! I was all snuggled in until That Jenga said "Hey Scoobie Doofus! You'd better watch your tail coz that thing belongs to Ms. Stella & she won't like it if you're in it! The last cat who tried that got all their furs melted right off when she looked at them with her GINORMOUS eyeballs and FIRE shot out of them and the next thing you know That Woman had to get the giant sucky thing to clean up the mess! 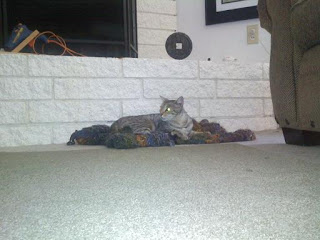 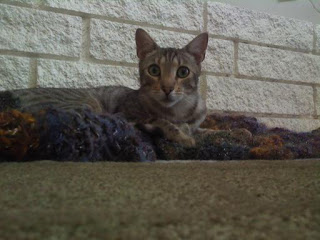 Giant Fireballs! Big Sucky Thing?! Jenga, I think yer pullin' my paw! I mean like, dude I've only ever seen anything like that in a comic book!
Ms. Jenga just smiled and said: "Suit yourself string bean! Hey? Can I have your old curliebed after yer gone?" 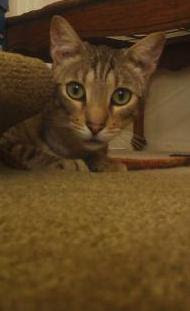 That's SO not even funny! I think she's just trying to scare the beejeebies outta me!
~moment~
Well maybe, um.. I mean, I'd um... rather be over here anyways... YAaah.. Cos um... I'm not askeerd of her! Some girlie cat! HaHA... wull. and plus I haven't seen her all day. 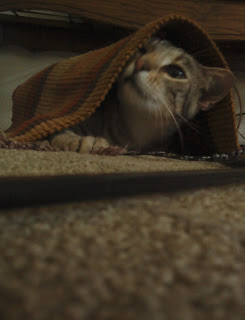 I think I'll hide out in "The Great Wrinkle of Doom!" There's like, NO WAY she'd ever find me in here! 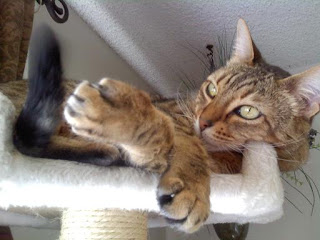 MeowOutLoud!...Silly Boy! All these girlie cats and he's the only boy...and he's such a baby!.. I should prolly tell him the truth...
but *yawn* it's my naptime now and I need my beautysleeps...
Posted by Stacy Hurt at 4:22 PM