decided to go for a midnight swim 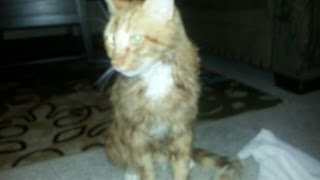 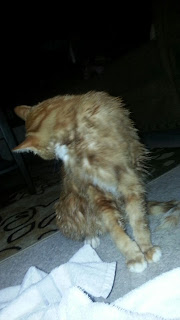 since *I* was in the house at that proper hour for treats ...﻿ 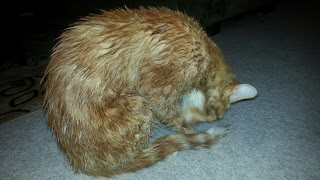 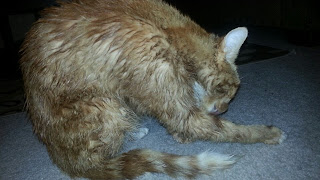 Ollie:  "shut up!"
note from That Woman:  So, I'm calling him and calling him.  Finally I see his head a the backdoor; I open the door (seeing as how it's still 80 degrees at midnight the a/c was on)  I open the door and he's just sitting there, so I open the screen (ours has a cat door in it that's open but he still hadn't moved)... I go to pet him as he looked up and meowed at me, that's when I felt that he was wet.  And not just just damp, but *I just feel into someone's pool* sopping, dripping wet!
I laughed all the way into the bathroom where I carried him (so now we are both sopping) and got him mostly dried off.  He had the decency not to get on the bed till he was good and dry.  Poor thing, I felt so bad  for him.