For the Love of Ginger 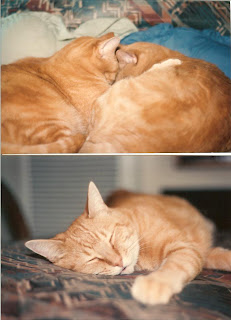 My first two cats; Ginger & Taffy. I was 19 or 20. On my own in my first apartment in Arizona. I went to a woman's house who had put the add in the paper 'Free Morris cats'. (LOL Back when cat lovers knew who Morris was). When I arrived I was directed to the barn. The kitten I first picked had run out to me from under a tractor. She became 'Taffy' (she is the cat on the right in the grouped photos) and the one just above by herself. She was SO Orange and SO white. She is also pictured on my antique sewing machine below in the window light. 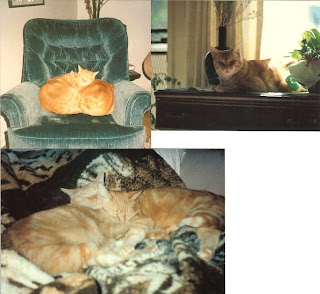 Then; as I didn't want to have one kitten who would be alone while I worked all day; I needed one more. This proved daunting considering the only other kitten available was hiding; way under the tractor; with the black widow spiders. (now y'all know I like those spiders but I don't want to be bitten thank-you-very-much! and technically they'd be well within their rights considering I was intruding on their home turf!) Anyhow... 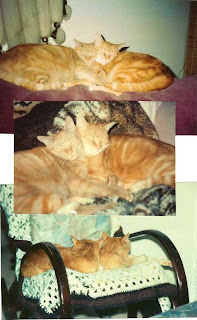 The woman grabbed a broom & 'shooed' the poor wretched mewling thing out from under the tractor & before she could scramble back. One of the woman's kids grabbed her first by her tail and then by the scruff of her neck & thrust her at me. She was hissing; trembly and growly and she appeared to be covered in grease! It was love at first sight (for my part).

I took both cats and put them in my car. This was before I knew there was such a thing as a cat carrier. I had a VW van (my first car too) and it had a bed in the back with a giant quilt on it; they both burrowed under the quilt and stayed there till we got back to my tiny apartment where I had to fish them out amid screams (mine) & claws (theirs).

That marked the start of a relationship that lasted over the next 20 years. Almost instantly after getting them inside and finding my bed (which was a mattress on the floor) we all lived quite wonderfully from that night on. Both curled up as you see them from then on; usually against me somewhere.

So many memories of my beloved Gin. When I got her home that day I washed her so much her poor fur was almost coming off till I realized she wasn't supposed to be the same color as her sister! Taffy was the wayward wanderer; fearless; hang from the drapery rods kind of cat. Gin; on me; on my lap; in my hair at bedtime for the next 17 + years.