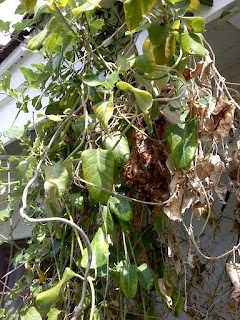 I am referring to the Bushtit nestlings. It hardly seems like a last weekend they were a loud & happy bunch as each parent would flit back and forth to and from the nest with beaks full of spiders, flies and tiny gnats to feed their nestlings. I only went out for an hour or two this morning and when I sat in front of the slider around 2pm; no longer did I hear them; I waited & read (Crow Planet) and realized after a hour or so; they must be fledged. *sniff* I missed it. I so had wanted to see those tiny feathered miracles leave the nest. I had rather hoped it would take a few days, you know... Try and fly, end up tail over beak on some nearby twig... but alas, it wasn't meant to be.

This Bushtit’s nest is a 9 inch long pendulous sack, made of spider webs and fuzz, grass, string and lichen. The nest is so snug, the adults need only spend 40% of daylight hours incubating the eggs. To learn more about the Bushtit, please visit BirdWeb.org. You can see the tiny dark whole that is the door. Over the last couple days when a parent would fly into the nest; you could see the sides get all wobbly & sticky outy where there was obviously a commotion going on of tiny gaping beaks and loud peeps! My camera phone's microphone was too lousy to capture it. But you could hear them from across the yard! 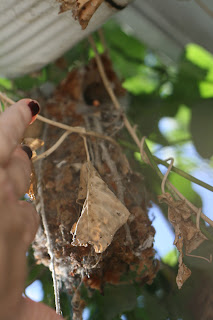 I wouldn't have ventured this close when the nestlings were still inside for fear of stressing the parents.

There is some evidence of communal nesting by Bushtits, but it is limited to southeastern Arizona. Helpers at the nest are usually adult males. During nesting season, flocks break up, and pairs establish loose territories, although they appear to tolerate other Bushtits within their territories. Both members of the pair help build the nest. The nest is an impressive, woven, hanging basket with a hole high up on the side of the nest and a passageway to the nest chamber at the bottom. It can be up to a foot long, and is generally built of spider webs, moss, lichen, and other plant material. Inside, the nest is lined with plant down, fur, and feathers. If the pair is disturbed during the early stages of nest-building, they will abandon the nest and find a new location, sometimes finding a new mate as well. Both parents incubate the 4-10 eggs for 12-13 days, sometimes at the same time. Both brood the young and bring them food until shortly after they leave the nest at about 18 days. They generally raise two broods a year.

And from this cool blog: Bestiarum I got this darling shot of what a fledgling looks like 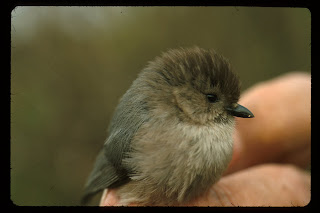 Note the diminutive size! Is that a daily 'squee' or what?

Well, all we can hope is that the pair return for possibly one more brood before nesting season is over in July. But I was truly inspired to be host to such a wonderful natural event.