I don't know about you kitteh's
But I don't like change too much
That Woman has been overcome by some manic desire to suddenly take MY whole house
and turn it upside down & inside out!!!
On top of THAT nightmare she can't even make up her MIND!
(which only gives further evidence that she's lost hers)

CASE #1
Here's part of my living room, this photo was taken from MY chair (you know, the one she FINALLY had new cushions for my old self to enjoy) 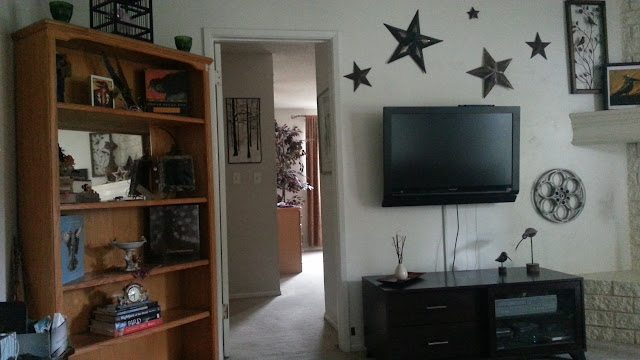 well, off went she & The Gurl and when they came back again That Woman did this! 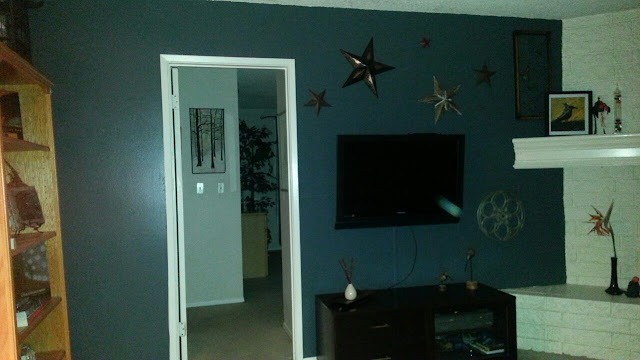 The VERY NEXT MORNING I got up late and came out to THIS!!! 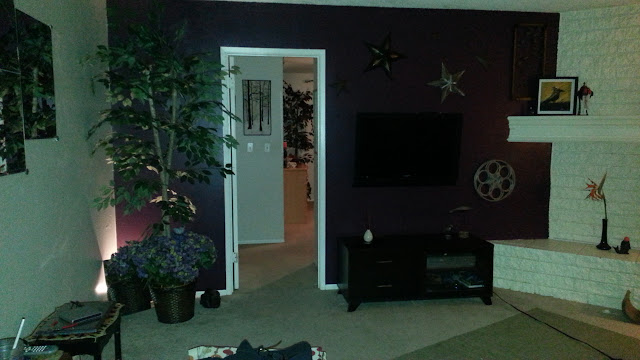 Youz can kinda see it's a dark purple color
AND the bookcase  my afternoon napping shelves are GONE!
That's right!  In it's place she put some el fake-o tree!!!  And if you look just to the right of that, there's an El Fake-o CAT! AS IF we need another one of them! **I will say that it was HEElarryous when the Ornj Mutant came a running in the other day & noticed it sitting there, he just FROZE SIDEWAYZ!!! MOL!!! He was all stiff and pouffy and was moving like the 6 Million Dollar Cat!!! All slo-mo and his nose was goin' like mad but nothing else was moving!!!-- Now kittehs, I tell you, I laughed till I started hackin up Nip outta my nose!  I was sittin on the chair watchin this whole thing and That Woman saw me gettin' all pouncy like I was gonna charge at him from behind and REALLY give 'em a fright & then she YELLED at me!  By then the spell was broked & Ollie ran off in search of poor Miss Jack to chase around.  But I still was laffin to myself later that night every time I remembered him all pouffed out by some silly wooded kitteh... But back to my dilemma....

Seriously?
What is a kitteh to do?
Well I'll tell ya,
I gave her the ole lazers on high!
The only thing I DO like about this change is that she put the Doofus' Cat Tree in a corner so now when
he hauls up all 14 lbs of hisself at high speed it doesn't rock back and forth and give us all heart palpitations.
If y'all want I can have her post the rest of the atrocities she's committed lately but really,
it would prolly just put you off your kibble.
And THAT is saying something!

Signed,
All disheveled in The OC

(and you thought I was all lazer eyed at That Spitty Cat didn't you?)
I'll be dealing with that trifling annoyance later...
Posted by Stacy Hurt at 10:09 PM