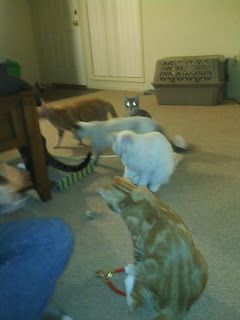 so.  a couple of months ago Ellen's father found a mother cat & 6 tiny kittens outside his apartment door.  Not wanting to leave her out in the dirt, he managed to get her inside (after much blood was shed when he attempted to put the grab on her)  as her kittens were new I told him to bring them in first & she would most likely follow.  ya.  right. 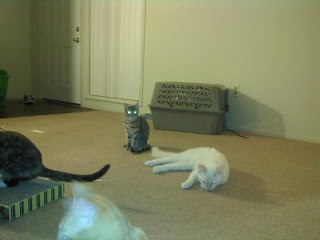 He tried calling all the rescues in our area and was told (with much regret) they had no room at that time but to check in a month or so.  Since the kittens had just been born he agreed to keep them a bit longer.  It's now been three months and we are at disaster stage (if you ask me- which I know he's not)

Well, you can see they are quite a bit older now and he has simply refused to take them to the shelter. I offered my supersize carrier a last month for this task & it was not done (you can see it in the background there).  Personally, I don't think he can do it emotionally.  It's upsetting to me as he calls and laments his problem of having all these cats but claimed that when he called the shelter they said because he had had them for nore than a week these cats were no longer 'feral' and they would charge him to take them.

I don't get that.  I just had to take that gorgeous black house panther who was indeed feral (but friendly) a couple weeks ago.  I dropped him off which much regret but there were no questions or money required.    I told him if that truly was the problem then have his sister take a few to her shelter.  He would then not be walking in with 7 cats!  Well, here's the photo proof they are still at his apt.

Now I believe the momcat is prego again from one of her own sons and I am angry and apalled! She's not even a year old yet.  I know in his way, he was trying to do the right thing.  But this is bad!  He had to go out of town for three days for a job and asked our daughter to come feed them while he was gone.  He knew I'd be over there too checking on them & trimming their claws since they nearly shred Ellen to death when she plays with them. He even had the nerve to tell our daughter that he 'wouldn't be heartbroken if they were gone when he returned'.
Think he knows me?

WTF?
At first I said absolutely not! (to my daughter)  my exact words were 'Bullshit!  Let him Man-up and take them!'  If that sounds harsh dear readers it's because I'm still living with two from the last litter he brought home ten years ago!  ...oof, sorry... I digress

I hadn't realized how bad it was till I went over there tonight with my daughter to trim their claws. (THAT was fun!)  When I saw the bellie on the momcat all big and pretty solid I can only think that she's pregnant again.  She did nothing but groom herself from her waist down the whole time we were there.

So,
Tomorrow
My daughter and I will be loading them up
As adorable and charming and playful & gorgeous as they are
and taking them to the shelter.

It breaks my heart to think they will all be immedately placed in separate cages after so long being with each other.

look at this calico darling in the back on the right.  the siamese is on the left! 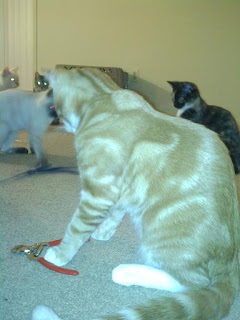 I want this one sooo badly^^^
He is ornj.
He must be in every shot because he simply will not let you alone.
He purrs on sight, his coat is so soft & slick & he comes to you instantly rolling over on his back, paws up!
OMC give me strength!

This one below is just gorgeous with his giant floofly paws & tail and mane! 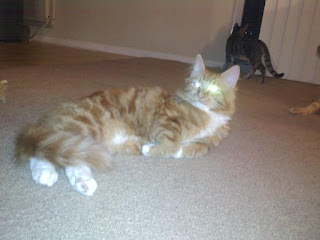 There is also a  grey tabby and an all white with a slightly orange mask. He's the eldest & I think he is the one that may have mated with her.  He's huge! In that second shot above you can see the size difference between him and his sister the tiny tabby! 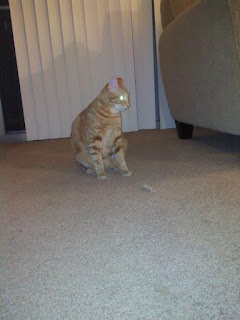 Momcat.
She is loving and darling and sits at the door looking out 99% of the time.

So, the moral of this story I guess is:
When hard decisions have to be made and carried out,
It's mom's job (big surprise!)
and this mom is saying not nice things right now she won't repeat for the wee kittehs may be reading.

Wish us luck
I appreciate the support
Posted by Stacy Hurt at 7:59 PM