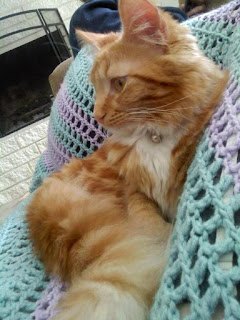 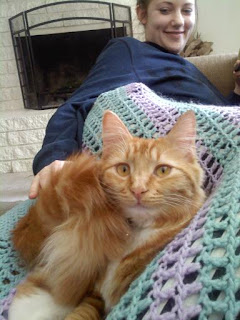 We haz a question!

Last night, Elliott came out from behind the couch (near the giant cat tree) dragging his hind leg!  He yowled & hissed!  We immediately ran to him (so did Ollie- so cute!) and I picked him up very gently, when I got him to my lap I had a hand under his chest/rib cage & one hand under his back legs when I heard a 'pop'.

Both El & I heard it.  It was like when we each do our stretches and our hips will on occassion make that popping noise.

He stopped hissing and yowling right off after the pop and I continued to massage his leg (and just slobber all over him in general).  I put him down and watched him, he walked fine, a really minor gimp but after an hour he was fine & running through the house after his brother!  I put a stop to that!  I immediately went and laid the big cat tree on it's side so the boyz wouldn't go crazypants and start running up it again like they do at night.  (They weren't happy about this at all but since we had a cardboard box in the living room (it was a small one only 10" high) they seemed happy enough.

Only thing I can figure is that he was coming off the cat tree & somehow landed badly or struck the small table that is 2 feet from the cat tree on the way down.  By the end of the night he seemed fine but of course I was still quite worried.  I went online & looked up 'hip dislocation' and found a plethera of sad stories of surgeries costing ﻿thousands all the way down to 'just keep them quiet in a cage for 6 to 8 weeks and see how they do'.

He is being kept (with his brother) in The Gurls room all day today and since I won't see him until later my worry level is around an 8.  (which is good given that my first instinct was to run off the to 24hr ER place which would have been realllllly pre-mature given his degree of recovery within minutes)  He seems fine.  I am just concerned, I've never had this happen to a cat before.  No idea if it's common (like for us humans) or drastic (like in goggies).

So, I would totally appreciate any advice.

Thanks!
That Woman
Posted by Stacy Hurt at 1:12 PM