I Strongly Encourage You!

To check out National Geographic's
"The Most Unforgettable Space Shuttle Photos"

This one took me by surprise!  I had no idea there was a 'write in' campaign to name the first space shuttle after the Enterprise!  HOW COOOOOL! 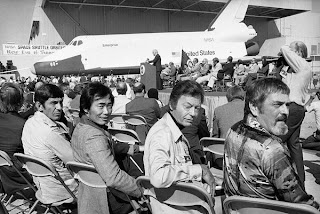 Photograph from AP
Originally slated to bear the name Constitution, the first space shuttle to be built was dubbed Enterprise following a write-in campaign from Star Trek fans. Above, cast members from the science-fiction show attend the shuttle's rollout ceremony in Palmdale, California, on September 17, 1976.
From left to right: Leonard Nimoy, who portrayed Vulcan science officer Spock; George Takei, who was helmsman Hikaru Sulu; DeForest Kelly, who was chief medical officer Leonard "Bones" McCoy; and James Doohan, who was chief engineer Montgomery "Scotty" Scott.
Posted by Stacy Hurt at 7:56 AM