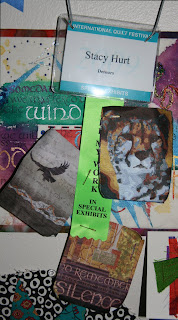 I would like to say THANK YOU to Karey & her fabulous band of fantastic femme's who worked so tirelessly to make the Long Beach Festival such a HUGE success! You gals ROCKED!

I nearly fainted with joy when I walked through the big open doors to see my own work staring me (literally) right back in the face! My Cheetah quilt was about as front & center as you could get. It was part of the 'West Coast Wonders II' exhibit and was flanked by one stunning piece of art after another! I was truly verklempt! So much for the mascara! After composing myself; my friend Julie snapped this pic. What a momentous occasion for this virtually unknown quilter from Orange, CA. 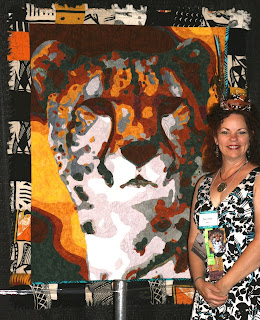 My Journal Quilt was there as well representing the water element: "Flamingo Walk" 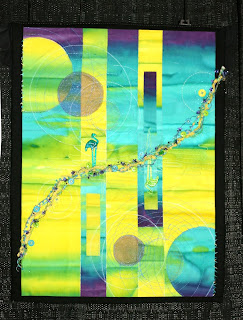 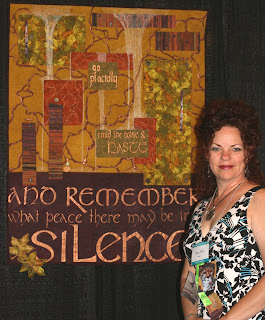 My buddy Julie and her Edges piece: 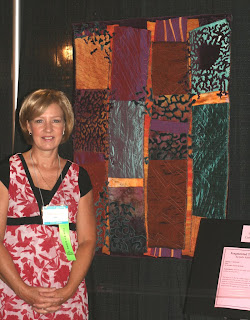 That's all cut work, velvet. She did all that by hand! 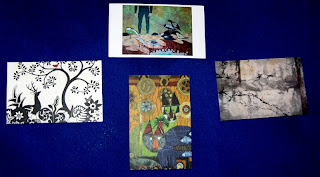 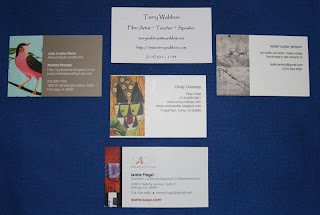 I had one for Jamie Fingal but now can't find it :(

I will tell you that went I went over to Make it University & Judy Coates Perez was sitting there in her darling groovy yellow apron, I immediately went right over & said "There SHE IS!!!" Where is that lovely flip thing with your art on it??" She was gracious enough to actually act like she knew who the heck I was & what in the heck I was talking about! (Ok, I posted on her blog when she first showed it off, but really, I didn't expect her to actually remember)LOL. That's a classy gal right there!

As I kept walking I hear a voice shout out "You WIN!" and I stood there because A.) I was wearing my Tiara and B.) I'm nosey & want to see who won and what it is! This adorable little gal sitting there calls me over & gives me an ATC she's made. She says it's because of my Tiara. I'm so thrilled I don't even realize who I'm talking to! It's MELANIE TESTA!!!! I'm standing there like a big doof and MELANIE TESTA is giving me one of her ATC's!!! Just when I thought I couldn't be anymore verklemt than I was all ready between the Cheetah, Ms. Perez & being filmed by Bonnie McCaffrey (ok, more on that later!) Here it is; I will treasure it always!!! Thank YOU!!! so much Melanie! 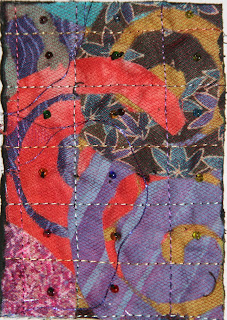 I pinned it on my dress & wore it proudly the rest of the day!!!

Speaking of running into folks! A gal I've been friends with online for awhile now was going to be at Festival & we exchanged cell numbers so we could 'meet in person'. I was so thrilled to see her & we hung out for a good while chatting & laughing & even walking the vendor isles a bit. SO much FUN!!! I was sad when I had to leave her but it was such a great highlight of my day!!! Here we are, me & my buddie Lynn Douglass 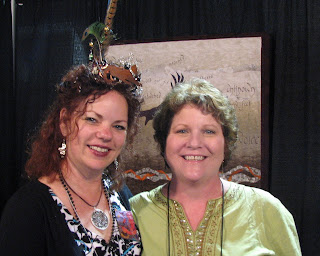 We're standing in front of my Detours piece "Noah's Raven".

Here's a shot of me & Cynthia Catlin; she's in charge of exhibitions for Quilts on the Wall: Fiber Artists. Many of you may not know, I'm currently President of this group (2 years) and Cynthia is the past president & now Exhibitions Chair. There are over seventy members in this group. She works incredibly hard on our exhibits for Quilts on the Wall! Thank you to Susan Willen for taking this picture of us! 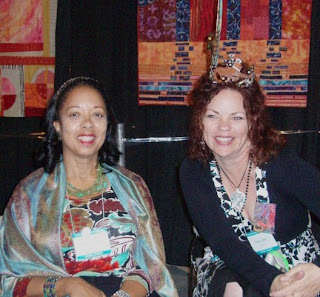 Here's some shots of my 'Combat Tiara for the Dangerously Fabulous!" Though there was no official 'parade of Tiara's' this year, I made one anyway just in case. 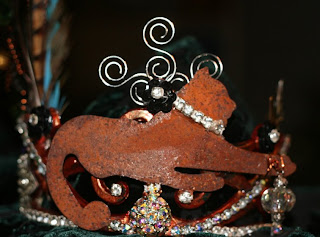 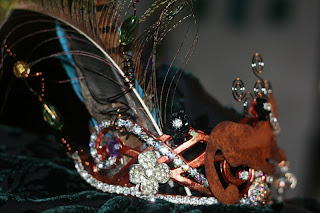 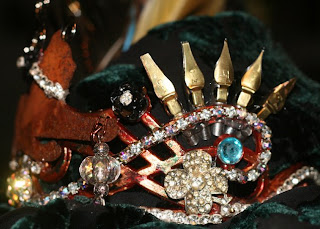 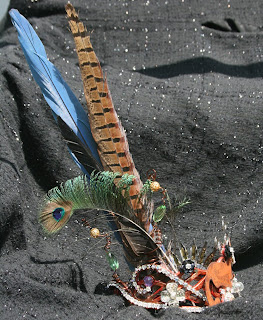 What I shared at the QA/SAQA reception: Still a WIP but getting closer Sarah! 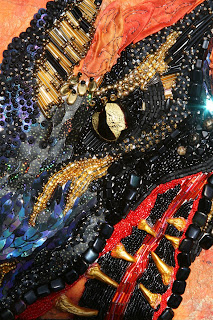 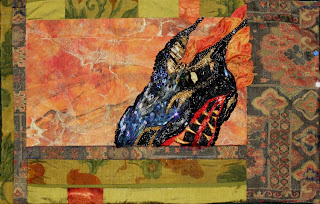 What we bought! Julie & Cindy & I had a blast at the 'Hand Dyed' shop as usual! 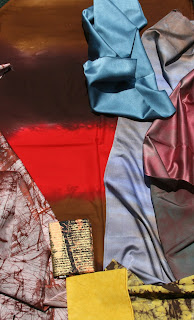 That brilliant Red is one piece that has browns on either side & that gorgeous red strip right down the middle. It's amazing!

These yummy pieces were from Anansi village. 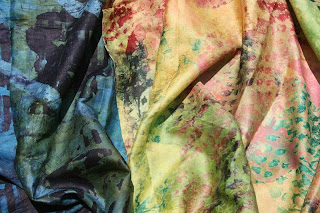 When we first got to Festival; Julie & I were standing at the Detours exhibit. I noticed a gal standing in front of my 'Noah's Raven' with a video recorder. She asked me if I'd like to be on film & say a few words. Being up for anything and feelin so groovy from my Cheetah high I was all excited to do it... Till I realized, I had to stand there and SAY SOMETHING on CAMERA! She asked me to say some words about the raven & my tiara, I kid you not, I stood there said 'what?'. I was so nervous I couldn't figure out what to do considering I couldn't really look at either thing while I was trying to describe it! I thought about ripping the Tiara off my head but the fear of having all my hair standing upright and askew on camera would be worse. If there was any useful footage of my fumblings I'll be amazed! I felt so dumb & my voice had tremours from being nervous! I mean, here's me who could get up & sing in front of crowds (and has) but without a script? or something to focus on? I was totally lost!

It was fun and when it's all over, she thanked me and was so nice & she left with Julie to talk about Julies piece in Edges. Then someone came up to me and asked 'So, did Bonnie McCaffrey interview you?' did I realize! OMG!!! THAT was BONNIE MCCAFFREY!!! SHUT UP!!! Well, it was a total geek out moment I can assure you! No idea, as I said, if any of the footage will wind up on the vidcasts of the show but ya; I'll be watchin! And later the next day; I looked up her site & watched nearly all her vidcasts & was blown away by not only the artists she's interviewed, but all the lovely quilts she's captured! Thank you Bonnie for showing those of us who can't go to Houston, or England those fantastic quilts!!!

So, that's my story... (not all of it; but there are somethings that have to stay under wraps just yet)