A view from my sketchbook...

in which we find the artist trying to grow...

Fair Warning: I am the first to admit that I can't draw. With that in mind I was really apprehensive about the thought of doing a sketchbook but all the fiber artists I admire so all have them; and swear by them: so... I bought one (ok; it was last year but I've been busy) and it terrified me. I mean really; all that white blank paper. I would sit with a pencil in hand (that was my first mistake) and try to think of something to draw (second mistake; of many so I'll stop counting now).

When I would try to draw in pencil it meant that I could erase. And I did; frequently, because any tiny stray line that was not utterly perfect would drive me crazy and thus; I could never 'commit' to the entire drawing because of many million mistakes. So I'd quit and reconfirm my belief that 'I can't draw'. I realized I needed a paradigm shift. So I went shopping... blogger shopping. Looking for tips & eye candy I desperately needed.

I was reading Pam Rubert's blog and would see that she only uses ink pens to draw. "Of course she does! She can DRAW!' I would lament. I checked out my friend Jamie Fingal's blog & she had sketch called 'doodling' and hers was all in pen. It looked immensely fun and the idea that you can just start with one shape (in her case a leaf) and then just do variations on that one thing somehow gave me the step up that I needed. Then I thought of something I hadn't before. What if I used a pen. What is the big deal? If I screw it up; then so what? It's my own sketch book; no one has to see my atrocites... So I started on night, very quietly in front of the fire place; to 'doodle'. I vowed that no matter what I wouldn't stop until the page was filled and if there was a 'mistake' or 'mistroke' then I would somehow turn it into something else or simply move on...

Here's my first page 'a la Jamie Fingal' in doodling. I call this lovingly, 'Catnip Dreams'. 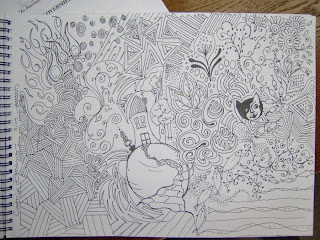 Couple nights later; some flowers; not happy w/Hummer but like the flower chain. 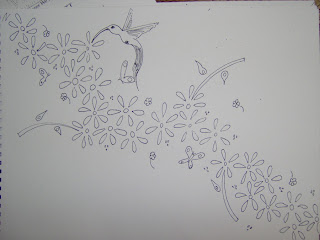 Later in the week; was really stumped & so went with a possible beading pattern. 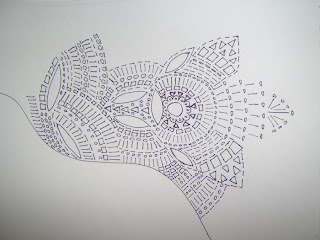 This was two nights ago; I was sitting in my bed in my pj's & caught a silohouette of myself in the mirror (the far away mirror!) and I felt the need to accept my body as it is right now; no fretting over diets; excersize undone; blah blah blah. Apparently I'm not ready for the 'full frontal view' LOL but here was my thought & affirmation to myself. 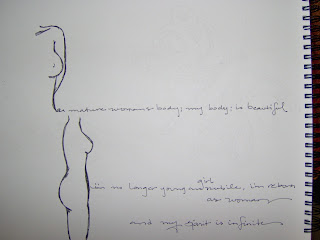 Night before last; some fun with letters & my own handwriting ideas: 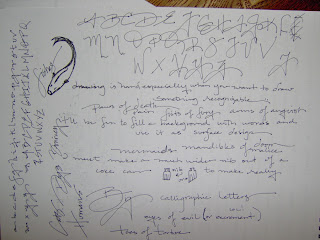 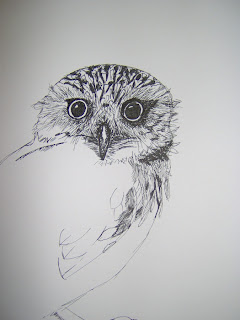 Certainly it's not done; but I am confident that using a pen (a pilot 'needle' micro) is the way to go for me. I was trying to do the 'light/dark' thing and so he's a bit lopsided; but I think it has promise and it's recognizable as an owl and I'm really amazed that I drew it.

Thanks for stopping by & feel free to leave any comments; even critiques as I really don't know the first thing about drawing except that it comes from a different side of the brain that I don't live in.
Posted by Stacy Hurt at 11:05 AM