One for the Books

Here's a story ya.  It's a bit long, but so worth the read.  It'll warm the cockles of the most ebil, flinty little black hearts.

That Woman has a buddie she works with and that buddie came in one day and asked her:

"Ok, you're the cat person right? (isn't this the best way to start the story?), What do we do?  At my condo there's this kitty who is hanging out on our back patio, he meows & meows but he hisses at us if we get to close. He looks half starved and we have tried giving him milk but he won't drink it. (smart kittie!)"

That Woman:  "You have several options, put a trap out and take him to the pound or trap him and do TNR, or keep him, start feeding him and gradually he will come to be friendly and want to come inside & you can take him to my vet who will fix him, give him his shots, trim his claws, give him a bath, etc. Basically make him a bit more civilized.  I will be happy to come and take him if he continues to be a problem.  I'm sure I can figure something out."

--Ms. Stella: Cod love Her, but I tell you if she would have brough another BOY into this house, I would have signed my resignation papers right then and you would be reading this from myself on the run."

That Woman: O for pity's sake Stell, what were we to do? Leave the poor boy out to get into who knows what trouble or be murdered or run over or *gulp* worse (with Halloween coming up)?  NO.  Stop being so selfish!

*it should be noted that her buddie sent a photo to That Woman of the kittie in question and he looked pretty sad.  Filthy, thin, scared.

Anyway:  That Woman kept tabs and her buddie got cost estimates for all that would need to be done and meantime her buddie (who was on maternity leave) had her baby and was feeding the kitty, her young son named him 'Patches' as he was white/black.

After Thanksgiving That Woman was back at work, her buddie returned and gave the end to the story.

Over the Thanksgiving Holiday they were home enjoying the weekend at their condo, they noticed a young girl wandering the complex with an older man.   Then she noticed the girl talking to Patches who was perched on the fence.  Her buddie flew out the door & was about to admonish the girl but the girl told her that she thinks the cat belonged to her dad.  Her dad had moved out of this complex in June and his kitty got out in the confusion and they couldn't find him, but couldn't stay either, the trucks were leaving to move him to Palm Springs.

Patches disappeared into the back patio and then the dad came up and so they all went inside.  As soon as the man saw Patches, and more importantly, Patches saw the Man, Patches ran and  LEPT into the mans arms and the Man was besotted and started crying and was rubbing and loveing Patches and Patches was rubbing and loving and purrrrrrrrrring his ever-loving little heart out to be reunited with his Man.  Patches real name is...  FESTER!  HAHhahahahahaha!  Isn't that the best name ever!??

Here is a photo of Patches/Fester before he went home to live with his Man and they lived Happily Ever After. 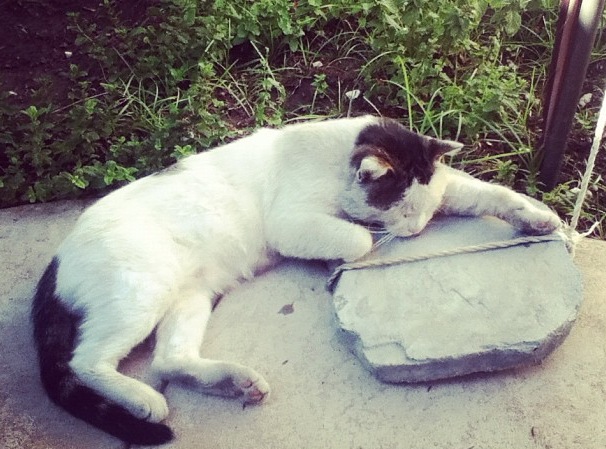 For the record,
That Woman here:  I would have taken him in a heartbeat, but my buddie
was doing right and giving him good food (that I told her to buy) and he did warm up
to them a lot after that.
He wanted to come inside, but they were rather superstitious and didn't want
kitty in with the new baby no matter what I said.  That's culture for you.

Ms. Stella
*who has unpacked her bag and put the treat box back on the shelf*